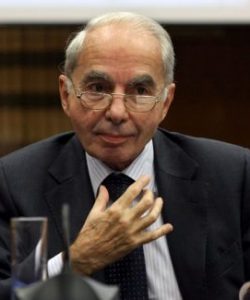 Ethics, ideology, religion: sources or dangers for the liberal states? Such is the question that we are called up to respond. Well, the answer is quite obvious: they can be both sources and dangers, because it does not depend on them. What really destroys the liberal state in communities where diversities in one way or another do exist is intolerance: intolerance that might stem from ethics, from religion, or from other sources. Now, the phenomenon we are focusing on in this seminar is intolerance coming from deeply diverse social conditions: the vulnerable versus the globalists, which is neither a religious division nor an ideological one, and this makes it especially interesting. Because we have to be convinced that the liberal doctrine is a doctrine of individuals, of their individual freedoms etc. But in order to be effective in practice it also has a necessary underpinning, which is mutual recognition. All of us, living together, as individuals with his or her own individual liberties, recognize each other as members of the same community. This is the point.

Now, there are some triggers of intolerance that might come from very different sources. Ethics can be used to create the texture of the community, but it can also be used to destroy the common texture; and religion the same, and ideologies the same. So when does it happen that instead of converging these forces are used to somehow disentangle, to destroy the common texture? Somehow, we know that different religious beliefs, even inside the same religion, after a while may create this sort of deep fracture, deep tension. There is a problem here of mutual understanding. If you ask yourselves why there has been a religious revival in recent years, substantially integralist and fundamentalist, this has clearly to do with developments in the relevant societies where some members of these communities felt their religious beliefs were not taken seriously. Here you have religion and also traditions, and also collective culture. They are mixed with each other; it is not clear where the one is due to the other or vice versa. It is a fact.

Let me take the European case, with the Poles. I’m not going to take on the American evangelical positions, which others here can do much better than I can do. You see, Europe is not so simple, it is not so integrally liberal. For those of you who are familiar with the case law of the Court of Strasbourg, the court of the Council of Europe, of the Charter of European rights of 1950, you will know that they rely on the essential concept of “margin of appreciation.” They have an issue and they say: well, there is a margin of appreciation for national parliaments. And as long as there are very diverging views, the Court is so cautious that not even essential rights sometimes are sufficiently protected to respect the margin of appreciation of the member states. But it’s a very difficult balance. I remember a horrible decision of Strasbourg regarding a student in a primary school, if I remember correctly, arriving in school with her veil. In France, no religious symbol is allowed in public schools: so the young lady was not allowed to come to school wearing her veil. The case went up to the Court of Strasbourg, and the Court of Strasbourg decided that the decision was correct, as was the statute, because this young lady’s veil was creating tension in the class, and therefore it was her responsibility to put an end to this tension – not the teacher’s responsibility to explain that she was entitled to do this because this was her tradition! So sometimes the margin of appreciation is badly used by the Court, but it means that different national communities are taken seriously with their different beliefs.

Regarding the Poles, who now stand accused by all of us: there can’t be any margin of appreciation for the respect of the separation of powers. But there is another chapter: individual rights and common beliefs. In the decades from the creation of the Community up to now, the original member states of the European Union themselves underwent significant developments in terms of civil liberties, of human rights etc. We started with homosexuality either being forbidden or close to forbidden – in the UK it was still forbidden in the early sixties – to asking ourselves whether the marriage between homosexuals was something that our statutes could provide for. We started with making babies the usual traditional ways, and we arrived to artificial procreation, and the great dilemma now is if surrogacy can be accepted or not to allow mostly homosexual couples to have children.

Let’s say I am a Pole, an old Polish citizen, a traditional Catholic, with my Catholicism as Radio Maria explained it to me before communism. Then communism arrived. I had to remain silent with my Catholicism. We got rid of communism. Now I’m not suddenly ready for homosexual marriage, for surrogacy, for making babies in such strange ways! I turn on the radio, Radio Maria is there, and I recognize myself in what they say: I mean, give me the time to understand! Give me the time to enter into these different sets of values. If you don’t, then I will immediately defend myself with my identity. Then I don’t recognize you as members of my own community, because there is such a distance between us, and I don’t have the time to bridge this gap. So there is a problem here, in European terms, of giving national identities perhaps more space than we already do, in order to build our common construction.

Finally, the other point regarding the vulnerable. Clearly here intolerance comes from an unexpected source. Or rather, it used to be unexpected. It comes from the fact that the difference in wealth and income, and the distance in terms of prospects for the future is widening. It’s not that the social ladder is still: If I’m a middle-class voter, it is going down while the wealthiest keep going up. At that point, we know that people don’t recognize themselves as members of the same community, and I become intolerant vis-à-vis you, and I expect somebody taking care of me to be more national than global. In this case, the issue is different: what has to be done is reducing inequalities, clearly reducing inequalities.

Here in Europe nobody dares to discuss a wealth tax. It might be naive, but what is being done in France makes sense: it’s not easy to envisage a workable wealth tax, but at least if somebody raises this issue, then I as a middle-class voter understand that somebody is taking care of me. At that point I might reconnect with the same common community, but otherwise I won’t. So that’s the point. The danger for the liberal state is intolerance. We have to identify the roots of intolerance and somehow take care of them to recreate a sense of mutual recognition.