Egypt is expected to hold new presidential elections in less than eight weeks. Despite this, the list of presidential hopefuls remained unclear until early afternoon of January 29 – that is, the real last hours of the last day to submit the required paperwork to the National Elections Authority to be allowed to run in the electoral competition. Eventually, president Abd al-Fattah al-Sisi will be practically alone on the ballot paper, rendering his re-election only a bureaucratic formality. In this regard, as ironically stated by Georges Fahmi, research fellow at the Robert Schuman Center in Fiesole and expert in Middle Eastern politics, “we should talk about selection more than election”. If the expected victory of the incumbent will be the logical ending point of these presidential elections, the almost end-less game of announcements of new candidacies and sudden withdrawals of would-be presidential competitors seen in the last few weeks appears as an interesting litmus test of the state of politics in the country today.

After a long wait, general-turned-president al-Sisi officially announced his bid to run for a second term in a television speech, during which the results achieved in the first four years of his presidency were redundantly underlined, on January 19. More importantly, without mincing his words, al-Sisi stated that “he will not allow corrupt politicians to take his place”. Put differently, the message was not only that the coming elections will be neither free nor fair, but also that the space for actual competition is tremendously limited. First and foremost, this has to be understood as the direct product of a ruling coalition largely unable to build sincere support for its action among the population. Interestingly, several scholars have repeatedly shown in their studies that repression is inversely proportional to the degree of legitimation exhibited by a political regime. As much as the latter is seen as legitimate by its own people, as much as opposition forces – at least, moderate ones – are co-opted and state repression tends to be circumscribed. On the contrary, the spasmodic use of terror and security forces at home means that the legitimacy enjoyed by a regime is limited. The latter scenario is precisely the current situation in Egypt. As pointed out by Robert Springboard, one of the most acute observers of Egyptian politics, al-Sisi’s regime is “the most narrowly based regime since Nasser’s takeover in 1952”. In turn, this explains the reason why the dominant elite is so nervous about the coming elections. The general feeling is that the bases of support for the regime are so narrow that whatever kind of political opening might be rapidly transformed into a stepping stone for opposition forces. Such a situation, has to be noted, was unpredictable in July 2013, when al-Sisi, at that time Ministry of Defence in Mohamed Morsi’s government, led a military coup against the first ever democratically elected Egyptian president.

The toppling of the Muslim Brotherhood government was supported by a huge array of social and political forces – from the Nasserists to liberal groups, up to key components of the still young trade union independent movement. In spite of this promising starting point, al-Sisi has been unable to consolidate a new ruling bloc. This has to be seen, in the first place, as an effect of the tremendously high continuity with the past in economic terms. Actually, if something has changed, it has been only in the direction of a deepening of neoliberal policies. Nevertheless, all this came at a price for the regime. That is, huge social exclusion of the lower and middle classes and the consequent necessity to close down political outlets that might have determined a radicalization of existing social dissent. Such a general trend emerged straightforwardly, for the first time, in the 2014 farcical presidential elections, which were won by al-Sisi with almost 97 percent of the valid votes cast. Since then, the aforementioned social and political trajectories have simply become more blatant. As soon as the March 26-28 presidential elections were approaching, therefore, the regime started working hardly in order to prevent any real manifestation of the opposition forces. This has been achieved in three main ways. 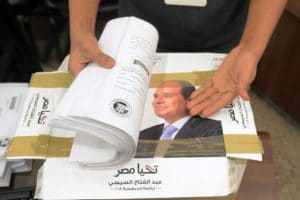 First of all, extremely high thresholds were imposed to running for the presidency. According to Egypt’s electoral law, in fact, presidential hopefuls need to collect at least 20 endorsements from Members of the Parliament (MPs) or 25,000 signatures from eligible voters across at least 15 of Egypt’s 27 governorates, with a minimum of 1,000 signatures from each governorate in order to be allowed to take part in the competition. For even-too-evident reasons, the former scenario was awfully unlikely. Not only over 500 MPs rapidly expressed their support for al-Sisi, but also a few dozen deputies who remained ‘free’ until the last stages of the process did not show any intention to endorse candidates of the opposition.

Second, through constant government violations of the most elementary norms, lack of any space on the media, and impossibility to find rooms to host press conferences and to organize the electoral campaign, candidates of the opposition were intimated and ‘forced’ to withdraw from the 2018 presidential race. The most important case in this regard was, for sure, the one of Khaled Ali. Ali, known for being a lawyer and an activist who has constantly supported labour rights and political freedom, announced intentions to run in upcoming elections in the early November. Unable to find 20 MPs who might stand for him, Khaled Ali started to collect signatures in several governorates, suffering from repeated intimidations by the security forces that raided his office in several occasions and arrested numerous activists of his campaign. Beyond the real possibility to obtain the required signatures, the candidacy of Ali remained hanging on by a thread due to his conviction, on September 25, to three months in prison over allegations that he made an inappropriate hand gesture after a court found him guilty of involvement in protests against the Tiran and Sanafir islands transfer agreement with Saudi Arabia. The waited appeal, which initially had been scheduled for early January, was adjourned until March 7, leaving therefore Ali’s candidacy dependent on the verdict. In such a situation of great political uncertainty, Khaled Ali eventually announced his withdrawal from the presidential elections on the eve of the seventh anniversary of the outbreak of the 2011 revolution.

Third and finally, all the candidatures of dissident figures from within the regime ranks were violently prevented. In December, armed forces colonel Ahmed Konsowa was sentenced to six years in prison charged with violating military bylaws, after he had announced his intention to run for president while wearing military uniform – a forbidden practice in al-Sisi’s military dictatorship. More importantly, Ahmed Shafiq, former prime minister in the last month of Mubarak’s regime and candidate in the 2012 presidential elections won by Mohamed Morsi, at the end of a weird story in which he was allegedly arrested for a few days, tweeted a statement that his five-year stay in the United Arab Emirates had affected his ability to follow “closely what was happening in our nation, including developments and accomplishments despite the difficult circumstances caused by acts of violence and terrorism”. The withdrawal of Shafik from the presidential race in the first week of January was compensated by the surprising move taken by Lieutenant General Sami Anan, former deputy chairman of the Supreme Council of the Armed Forces (SCAF) – the military body that ran Egypt from Mubarak’s fall until Morsi’s victory – who announced his candidature. Anan’s decision was certainly a sign of the deep conflicts within the Egyptian ruling coalition and in the military ranks as well. Such a feeling, moreover, is strengthened by Anan’s top military position fulfilled in the recent past and, according to several sources, by the huge support that he still enjoys in Washington and Riyadh.

Not less significant was, however, the reaction of al-Sisi’s entourage. On January 23, Anan was arrested and referred to military prosecution, being accused of announcing his bid for office without first acquiring a permit from the military. A few hours after the statement was aired, Anan’s campaign was officially suspended. Exactly because, as stated by Springboard, Anan might have become the man behind whom some kind of space of contestation was opened, and the regime cracked down on him.

The withdrawals from the presidential race of Khaled Ali, Ahmed Shafiq, as well as the arrests of Ahmed Konsowa and Sami Anan determined the concrete risk of having elections with a sole candidate – that is, president al-Sisi. A situation that, though formally not forbidden by the law, which simply required a 5 percent turnout in order to consider as valid elections in which only one candidate is present, the regime wanted to avoid for reasons of internal and international reputation. On January 26, therefore, al-Sayed al-Badawy, Wafd’s party chairman, announced his bid to run for the presidency. This happened after that al-Badawy’s party together with the left-leaning Tagammu’ had announced their support for al-Sisi just a couple of weeks before. Surprisingly, however, 41 of Wafd’s 45-strong supreme board voted against the decision taken by al-Badawy, leaving once again al-Sisi alone in the presidential competition. In a starling turn of events, only 15 minutes before the deadline for filing the candidacy papers, Moussa Mostafa Moussa, chairman of the liberal-oriented Ghad Party, announced that he had already submitted all the required documents to support his candidacy. Claiming to enjoy the backing of over 45,000 citizens and more than 20 MPs, Moussa declared that “his support for al-Sisi does not contradict his candidacy”. In the coming days, the National Elections Authority will announce the final list of presidential candidates, which should include al-Sisi and former al-Sisi’s supporter Moussa.

With no surprise, opposition forces have already called to boycott the March presidential elections.

Members of the National Elections Authority give a press conference in Cairo on January 8, 2018, to announce that Egyptians will head to the polls on March 26-28 in the first round of a presidential election.

Focus In / Focus Out
Analysis
Other analysis
Dossiers