On mild and sunny Sundays of Lebanese fall, Beirut’s seafront draws crowds of working-class Lebanese and Syrian families. In Dalieh area, a rocky peninsula in Raouche neighbourhood, people get together to picnic, smoke nargileh and enjoy the last days of warmth. Many boys get a kick out of diving off of its limestone cliffs and swim in its natural pools. Ahmad, 11, comes here almost every week with his friends. He is Syrian, as many of the guys here, lives with his family in a poor suburb of Beirut since they fled Aleppo five years ago. He cannot read and write, since he never attended school: in Syria he was too young to go to school and now he has to help his family to earn a livelihood.  The chance to get an education is fading for Ahmad, as it is for many Syrian children in Lebanon. You can see them in the cities’ streets begging or selling chewing gums and tissues at traffic lights, or working in shops and restaurants. By night they mingle with Beirut’s movida to sell flowers in the crowded roads of the city. Outside the cities, they work the land, boys and girls engaged in harvesting all day long for very little money, or in exchange of land on which their tent is settled. In Lebanon child labour is strictly forbidden, but apparently  it has become a norm among Syrians. 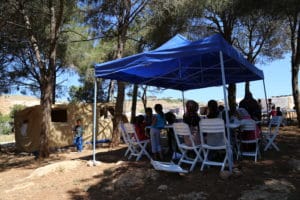 Lebanon is hosting approximately 1.5 million Syrian refugees, (almost 25 per cent of Lebanon’s population), of which one million are officially registered with the United Nation, and mostly live in informal camps (known as informal tented settlements) scattered around the country. The Lebanese government (that does not recognise international conventions on refugee status) has for a long time rejected the implementation of formal refugee camps, fearing refugees’ permanent settlement.

There are approximately 496,000 school-age children in the country, and 48 per cent of them are enrolled in schools. Actually, the exact number of Syrian minors in Lebanon is unknown, and it is very likely that the number of out-of-school children is much higher. Those who do not study are spending their time at home, in the street, or at work. Many girls face early marriage as a way to reduce the family’s economic burden or to keep them safe from harassments and abuses. After more than six years of conflict, lives and expectations of many Syrian children have radically changed, both in Syria and in host countries. They are on the verge of being a ‘lost generation’. According to the Glocal Cluster Education, before the war the literacy rates were around 95 per cent for 15-24 years old. Today, estimations put Syria among the countries with the lowest enrolment rates in the world.  Assia, 62, is the grandmother of four aged between 5 and 13. They fled Syria, from Kunaytra governorate, in 2013 and settled in El Ain, North Beqaa . “My kids are orphans, I grew them, and I am a widow,” she says. “The moment I got the chance, I came to Lebanon, but here the life is tough and I started working in agriculture to pay the rent. I do not want my grandchildren to be illiterate like me, I came here because I was told they can attend school and they do, but in the morning, before the lessons, they work in a bakery to earn some money. They are paid 2,000 or 3,000 Lebanese lira (around 2 USD) per day.” While Assia and her grandchildren live in town, many Syrians live in camps under very poor conditions. Even paying transportation can be a big problem, especially for large families. 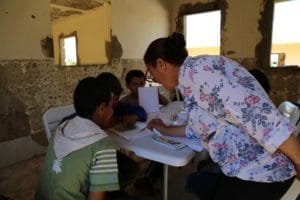 Therefore, the main problem is economic, but it is not the only challenge that Syrian children have to face to get an education in Lebanon. “Those who attend school have first to deal with the problem of language,” explains Lucas Wintrebert, Education Coordinator at the Lebanese NGO Amel Association. “In Lebanon the curriculum is taught in either English or French in addition to Arabic, whereas in Syria it is taught exclusively in Arabic. Furthermore, many children have been out of school for years or have never attended one because of the conflict, so there are teens who do not know how to write and read and they are supposed to attend classes with six or eight year old kids. In addition, they often face discrimination, bullying and harassment in class or on their way to school, from classmates, bus drivers or teachers. All of this does not motivate children to go to school.”

Last spring Amel started a new project, the Mobile Education Unit, to reach out to children in the camps in Khiam-Marjayoun area, South Lebanon. A bus, equipped with educational and recreational materials, brings on weekly basis teachers and a psychologist to five camps. “We provide children aged between 7 and 14, who are enrolled in school, with homework support, remedial classes, recreational and cultural activities, but, most important, with psychological activities.” Wintrebert says. “Most of the children who live in informal settlements suffer from some kind of trauma, because of what they have experienced in Syria and their current living conditions. In addition to shortage in basic services, abuses and violence are not uncommon.”

Under the trees in Marj el Khokh, in Marjayoun, one of the biggest refugee camps in Lebanon (around 1,000 people), children follow the lessons attentively, ask questions and review homework with the teachers. “They are friendly and smart,” says Salwa Tawil, Amel’s teacher. “They just need an environment to support them, so we try to give them that.” After the lessons, there are some educational activities -drawing, songs, games-, and some of the children have psychological consultation inside the bus. “The main problem we face is the discordant levels of education of the children,” explains Fatmeh Aawada, another Amel’s teacher. “Some have more knowledge than others, even though they attend the same class. There are of course children who do not like to study, but I am glad a lot of them start to like learning.” The bus also brings a bit of leisure to the camps to break the prevailing dullness. On Friday there is a movie screening, and Saturday is for games and group activities.

The project is part of the Retention Support Programme which targets, as the Unicef report of February 2017 explains, “children enrolled and at-risk children (3-18 years), who have low performance in exams and a cumulative absence of 15 days, with standardised retention support focused on learning-to-learn skills”, in order for them to catch up with their schooling. Basically, NGOs can only provide non-formal education, within the framework designed between the Lebanese Ministry of Education, UN agencies and local and international partners. Besides Retention Support programmes, they can run kindergartens (3-6 years) and implement BLN (Basic Literacy and Numeracy) programs; the latter is intended for children who have dropped out of school or have never enrolled or have failed to enrol, to provide them with basic knowledge in order to have the ability to enter public schools. Some aid workers think that their scope of action is narrow as the target they can reach must meet very specific criteria, especially in the case of children not enrolled in schools. 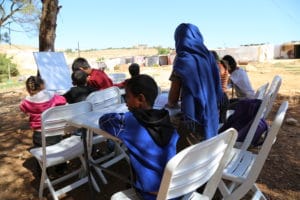 Regarding formal education, in 2014 Lebanon adopted the Reaching All Children with Education (RACE) policy, which entered its second stage (RACE II) this year and has recently received 100 million USD loan from the World Bank. For the past three years, Lebanese public schools have worked double shifts, and hired new teachers, to welcome Syrian students, who are supposed to attend afternoon classes. Last year 200,000 spaces for Syrian children in public schools were opened (around 150,000 enrolled). RACE II’s goal is to enrol 440,000 Syrian children by the 2020-2021 school year. Although the programme has achieved some success, too many children are still not receiving an adequate education.

International efforts to prevent the emergence of a ‘lost generation’ failed to achieve the goal so far, due to lack of timely, transparent funding, Human Rights Watch pointed out in a report released last September.

Focus In / Focus Out
Analysis
Other analysis
Dossiers