The route between Tbilisi and the small village of Jokolo, in the middle of the Pankisi Valley, features a striking mountain scenery. From the Georgian capital, nestled in a green valley, the road continues into the southern slopes of Caucasus Mountains, showing all their charm. The beauty of the mountain peaks on the horizon and the expanses of greenery and forests are breathtaking.
On the way to the Pankisi Valley the urban scenery changes. 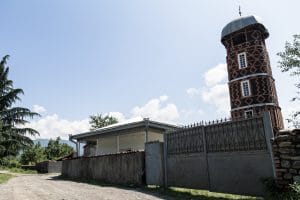 The Soviet-style apartments blocks are replaced by small houses stacked on top of each other, that have a somewhat ancient quality about them. Approaching Pankisi, the call to prayer for Muslims (Adhan), echoes throughout the valley.
In the distance an ornate striped minaret with colored diamonds of yellow gold, is discerned through some small houses, signaling one’s arrival in Pankisi.


The Pankisi Valley is about 10 kilometers long and 3 kilometers wide. It is located south of the Georgian-Chechen border in the mountainous Kakheti region of Georgia, along the south-eastern slopes of the Caucasus Mountains where the headwaters of the Alazani River flow down through the woody mountains and foothills of the gorge. The Alazani flows 351 kilometers south into Kakheti’s region and eastwards into Azerbaijan before joining the Caspian Sea.

A peculiar mix of cultures

The Pankisi Valley has experienced one significant period of instability since World War II, which was between 1999-2004. The onset of the second Russo-Chechen war in 1999 resulted in the migration of Chechen separatist fighters with a small number of foreign fighters into the valley who were committed to the struggles in Chechnya. All returned back to Russia within a short period of time and most eventually died there.
“A territory at the mercy of radical jihadists”, has often been the way the international media has described the valley, albeit with limited knowledge of the territory itself. The different communities that cohabit the valley strongly refute this negative epithet. The ethnic background of the population of Kakheti Province in general and of the Akhmeta district, in particular, is indeed very colorful. 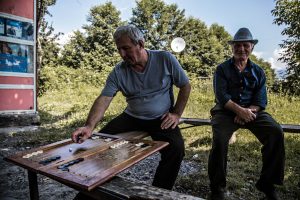 Its inhabitants are descendants of ethnic Georgians, Jews, Armenians, Vainakhs, Ossets, Daghestanis, Azeris, Greeks, and Russians, among others. Extensive intermarriage and intensive economic and cultural relations influenced the ethnic identity of the region’s non-Georgian groups. People in the valley explain clearly that the situation of lawlessness only became an issue of security when criminal elements involved in kidnapping and drugs exploited the chaotic situation on the border for lucre.

Visitors will find it easy to refute this international snub upon arriving in the valley; not only does one remain in awe of its beauty and the ancient culture that is still palpable, though still subject to attacks and criticism by those same radical Islamists, but the warm welcome afforded to guests help contest the negative press.

Pankisi is in-fact the historical valley where the Kists, an ancient Muslim community highly influenced by Sufism and though originally Vainakh, have been living since the 18th Century and is still thriving far from fundamentalist ideology. The Kists migrated from remote mountainous villages in the northern Caucasus and settled in the valley between 1830 and 1870. It was around this time that the new settlers became known as “Kists” to their Georgian hosts. Today’s Kists are Sunni Muslims. Despite assimilating into Georgian culture, Kists have proudly kept their own customs and traditions refusing to assimilate with other north Caucasian nationalities such as the Chechens and Ingush. They are typically bilingual in Georgian and Chechen, but also adept in Russian, and for official purposes declare themselves Georgian nationals.

“Marshua Kavkaz” – Peace in the Caucasus

The Alazani River, which has its source in the Greater Caucasus, flows peacefully not far from some small villages. Many locals, to cool off from the hot summer, sit on its banks relaxing and enjoying the view. 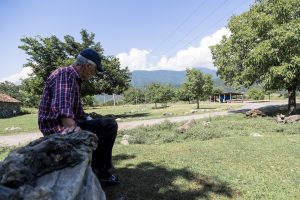 Among the horses that roam free in this quiet corner, old men look after their animals’ grazing not far from bathers.

“We have our traditions rooted in time, unique of their kind, such as the Dkhir. It’s an ancient Sufi ritual, practiced only by women in the valley”, says Tengizi Dakishvilian, a Kist breeder living in the valley.
And it is precisely this ritual and its message that makes this such a unique valley. Sufism is a mystical branch of Islam that emphasizes direct and personal encounters with God.

The Dhikr/Zikr, which means “remembering” in Arabic, refers to both a silent, individual appeal to God and to a communal prayer that involves recitation and an exuberant dance intended to dispel fear, unlock personal potential and bring the participant closer to God.

It consists of an ecstatic communal recital of the names of God that takes the form of song, dance and, here in Pankisi, the call for Marshua Kavkaz: “peace in the Caucasus”.
With the decline of Christianity in the area, many Islamic preachers from nearby Chechnya, Ingushetia, Daghestan, and Azerbaijan began forming different sects in Pankisi. The Kist Machig Machalikashvili disseminated the teachings of the Kunta Hajji sect. Kunta Hajji, a Chechen Sufi mystic and pacifist, was from the village Eliskhan-Iurt. He taught that God dislikes war, that all believers are brothers, and that they must trust their fates to Allah. The Kunta Hajji sect differs from others in its ritual practices. In Chechnya and Ingushetia, the Naqshbandi (a major Sunni spiritual order of Sufism) sect considers themselves Murids and do not perform ziarat (honoring of sacred places) and zikr/dhikr. The Kists perform this ritual in their own language because they did not speak Arabic.
“Women who participate in this ritual wish to encourage the outside world to think of peace, rather than war. This wonderful valley has to be known for this”, says Arbi Kavtarashvili, a local English student I met among the locals on the river. “Most of them consider themselves to be Hadjiists, preaching a doctrine of brotherly love and nonviolent resistance”, concluded the young man. It’s Thursday in the valley and the following day, like every Friday, the Dhkir ceremony will take place at the oldest mosque in Duisi, the central village of Pankisi.

Friday is the day of the Jumu’ah, a congregational prayer that Muslims hold every week. The old, colorful minaret spotted the day before appears at the center of Duisi, among a small cluster of houses. In the courtyard of the mosque twelve women are sitting silently. “Here is where we conduct Dhikr”, says one of the women, Khadishat Khangoshvili, one of the most influential attendees. In contemplative silence, the ceremony starts.
All the women begin by sitting in a circle, chanting the name of God and Muhammad and increase its intensity, clapping minute by minute. When inspired, they stand and keep the rhythm by stamping their feet to the melody of their voices. They then begin running in circles chanting  “La allah ilallah” — “There is no God but God” over and over again. The atmosphere is striking, the voices and the transported expression of one of the older women at the ceremony, Sobur Margoshvili, immediately draws my attention due to her ardor despite her age. 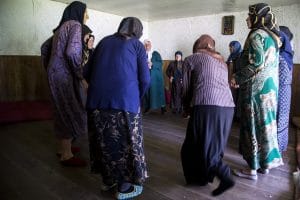 For those who are not familiar with Sufi tradition, perhaps it is more easily compared to the famous dancing/whirling dervishes in Turkey, with all the obvious differences, starting from the gender of the celebrants.

As the rhythm and the stamping increase, Ttheir chanting reaches a fever pitch. The ecstasy of every woman seems to erase the fatigue of their movement until the rhythm is reduced to a natural mystic calm, following the melody of the voice chanting the name of Allah. The Ceremony ends as everyone greets the “Grand Master” who led the Dhikir, still pronouncing the name of Allah and seemingly in trance.

While walking back to Jokolo, our eyes fall on some UNCHR tents. “They are Chechen refugees arrived en masse during the armed conflict with Russia in the Caucasian territory of the Federation,” Arbi tells me.
During the outbreak of the Russian-Chechen war in the 90s, a large number of Chechen refugees found shelter in the valley, dramatically increasing the local population, becoming an integral part of Pankisi’s communities, thanks to the commonality of the Chechen language with that of the Kists. 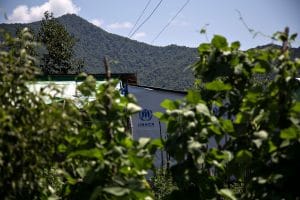 In December 1994, when the war broke out between Chechen fighters and the Russian-supported central government in Chechnya, Pankisi witnessed an influx of refugees from Chechnya. Among them were also many families of the Pankisi Kists, who after the disintegration of the Soviet Union left for Chechnya. The tide of refugees picked up considerably after the collapse of the 1995 Russian-Chechen cease-fire agreement and the new round of violence that broke out in late 1999. Between September and December 1999, refugees began pouring into Chechnya’s southern highland areas from the northern parts of the Republic. In the valley, local Kists ended up sheltering some 85 percent of the refugees.

“During the last conflict between Russia and Georgia over the breakaway region of Ossetia, in 2009, some people in the valley feared the worst”, says a local Chechen refugee; “some were afraid we might be bombed by Russia, because of the proximity to the Russian border”; this never occurred and tension in Pankisi valley since those days has eased to the usual quiet of a rural mountain area. Walking between houses of Pankisi, the call to prayer creates a unique soundtrack in the silence of the valley.
“Know that this is a rich valley of peace, culture and different people living in the tranquility of the mountains”, recalls Khasan Khangoshvili, an old shepherd from the Pankisi Valley, a territory that seems unencumbered by the negative information too often reported in the foreign press.

Giacomo Sini is a photo-reporter working for a number of Italan and international media outlets.