In a context of mass migrations and refugees’ crisis, with the Brexit, with the increasing strength of anti-system political parties in Europe and with the shocking outcome of the US presidential election, we are witnessing not only the upsurge of nationalism and populism, but at the same time new forms of violent polarization of the political discourse which are threatening one of the essential aspects of democracy: its capacity to deliberate through moderate contrasts and to manage conflicts, reducing the risk of radicalizing and delegitimating the competing political wings.

These new trends are putting at risk some core assumptions of the liberal model, based on tolerance, respect of cultural diversity, pluralism, and what we could call “diversity capital” of democratic societies. These same years have seen the failure of the Arab Springs and the extension of the authoritarian rule in the MENA area, a change that has crushed many hopes and promises of a democratic and pluralistic future.

After a phase of strong economic globalization and of expansion of cultural cosmopolitanism among liberal elites and in the public sphere of many societies, are we living a season of illiberal backlash which is putting the deliberative capacity of democratic systems under threat?

After nine years, the Istanbul Seminars have been suspended for 2017 and Reset DOC decided to move its dialogues to Venice and to promote on the above mentioned crucial questions an international conference in partnership with Giorgio Cini Foundation, University of Ca’ Foscari and Istanbul Bilgi University, from 8th to 10th of June 2017.

The Seminars are free and open to All.
Registration is required: please, in order to register click here
For more information send an e-mail to seminars2017@resetdoc.org

4.30 pm – 6.40 pm
Tiziana Lippiello: The Paradigms of Religious and Philosophical Plurality: The Return of “the Sacred” in the Globalized World and the Chinese Example
Alessandro Ferrara: Can Political Liberalism Help us Understand Populism?
Cemil Boyraz: Neoliberal Populism at Work: The Foundation of “Public Relations and Communication” Centers in Turkey
Chair: Albena Azmanova

9.30 am – 11.10 am
Luigi Vero Tarca: The Right to be Right: Recognizing the Reasons of Those who are Wrong
Adam Adatto Sandel: What is an Open Mind?
Chair: Murat Borovalı

11.20 am – 1.20 pm
Yves Mény: Back to ‘Basics’: Populist Primitivism in Modern Societies
Akeel Bilgrami: What is this ‘Populism’?
Chair: Volker Kaul

12.20 pm – 1.00 pm
Presentations of the Summer School Workshops:
(1) Solidarity and Diversity, (2) From the Crisis of Politics to the Rise of Religions, (3) Populism and Identity

Workshops are conducted by Manlio Graziano (From the Crisis of Politics to the Rise of Religions), Volker Kaul (Populism and Identity) and Stephen Macedo (Diversity and Solidarity).

The program may be subject to change. 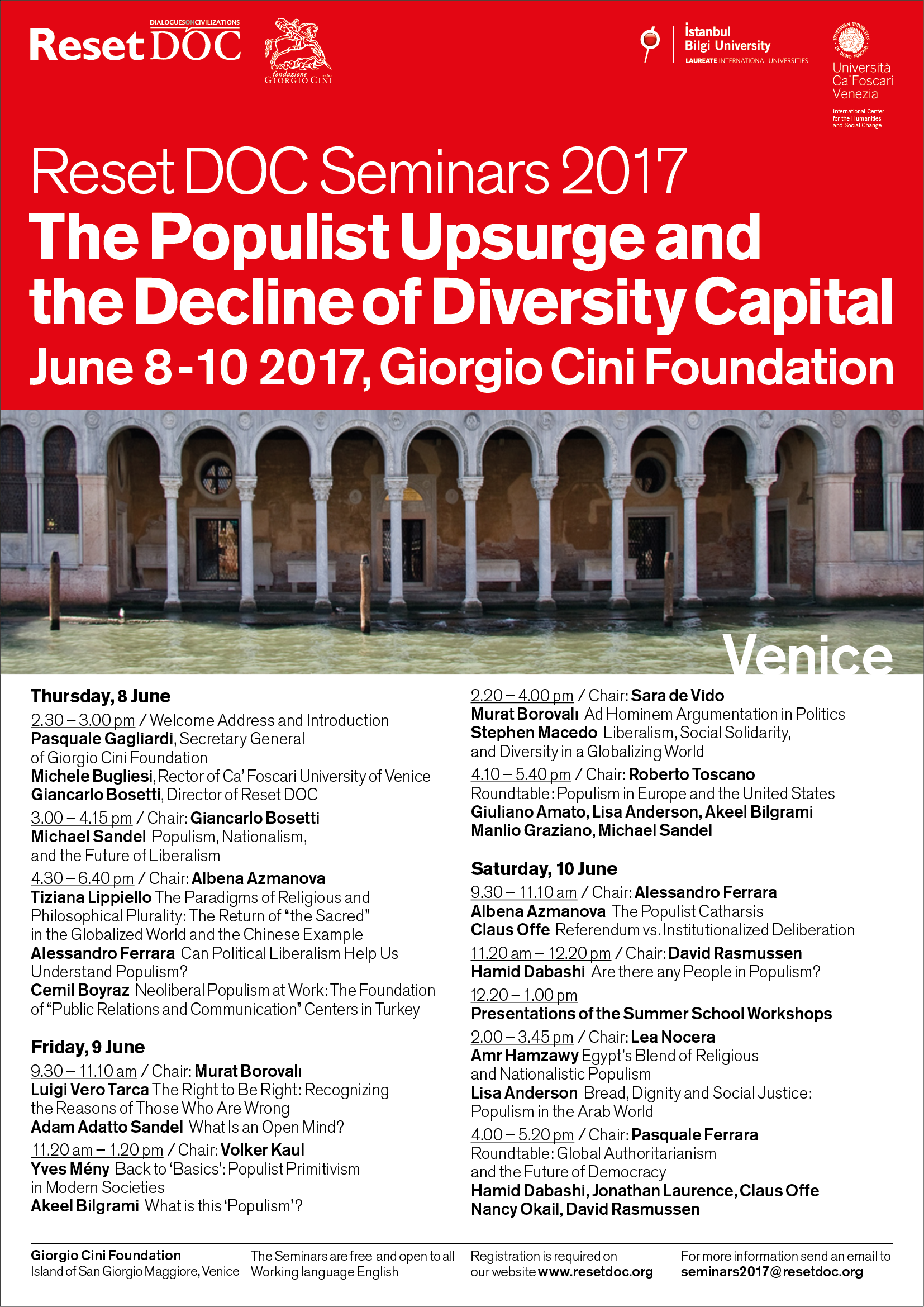