Berkley Center, Fondazione Bruno Kessler and ResetDoc are pleased to invite you to the “Exiting Violence: The Role of Religion”conferences.

The Conference “Exiting Violence: The Role of Religion” is online. Discover the seven panels of the  conference holde at the Berkley Center for Religion, Peace & World Affairs

“Exiting Violence: The Role of Religion” is a two-year research project led by the Berkley Center for Religion, Peace, and World Affairs, the Bruno Kessler Foundation, and Reset Dialogues On Civilization, aimed at examining how sacred texts and related theories shape political frames—either toward tolerance and pluralism or, on the contrary, to radicalism and violence. An initial conference, held in October 2017, focused on the hermeneutics of sacred texts used to legitimate and de-legitimate violence across all world religions.

This second conference will examine contemporary sociohistorical dynamics of religiously legitimated violence, as well as religious practices of non-violent struggles for justice and peacebuilding within the Christian and Muslim traditions. Panelists will engage in conversation on the following topics: the political-theological debates for and against the use of “legitimate” violence and peacemaking within the Christian and Muslim traditions; the sociohistorical dynamics of state power and non-state armed struggles in specific Christian and Muslim settings; and the practices of grassroots religious actors committed to peacebuilding and dialogue in contexts of protracted violence. 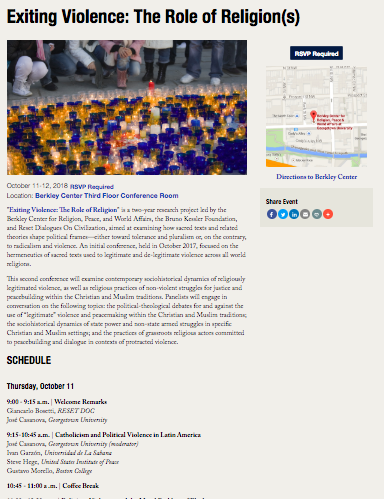