The Reset-Dialogues on Civilizations Award is presented to the short film that stands out for the clarity and effectiveness of communication that crosses the borders between various cultures, especially those that extremism and fundamentalism attempt to put in conflict, between the North and the South, between the East and the West, between mentalities that are distant in ethnicity, religion, traditions and behavioural codes. This award is aimed at rewarding the film most capable of dismantling prejudice and stereotypes, open to a vision of other realities, returning to viewers of all cultures a sense of shared humanity, respecting human rights and with a perspective capable of transmitting a sense of equal dignity that the human condition deserves in the most varied forms of civilization.

On Saturday July 26th, at 9 p.m. in Piazza Magenta in the small town of Capalbio, this year’s award will be presented to the winner by MP Khalid Chaouki, close to Reset-Dialogues on Civilizations for many years cooperating with the association on many occasions and in many battles for the rights of migrants and minorities and whose book is being published in the series Reset-Marsilio.

Francesco Bovo (born in Monselice in 1985) graduated in Entertainment Science and Multimedia Production from Padova’s Discipline delle Arti della Musica e dello Spettacolo (DAMS). In addition to his passion for films, he also became interested in the theatre, working as a lighting and sound technician at the Teatro delle Maddalene. His sources of inspiration include Stanley Kubrick, Tim Burton and David Fincher.

Alessandro Pittoni (born in Padova in 1984) graduated in Economics from Padova University. Since 2011 he has been the director of Marketing & Events for the non-profit Cineforum Antonianum association, a legendry film club. He currently works as a producer and author of brand name videos.

Speaking of their work, authors Francesco Bovo and Alessandro Pittoni explained, “What better way is there of portraying integration than using the sometimes ferocious irony of our country? The idea came to us when thinking of certain working environments where the tempo imposed does not involve much politeness, and where one must first act and then understand. ‘Vivo e Veneto’ is the story of a surreal, but very real situation. For those coming from abroad it is normal not to understand the rules imparted. Set in a number of dry and simple temporal frames, we envisaged filming the short in black and white from the very start, inspired by early films by Jim Jarmusch.” (Francesco Bovo and Alessandro Pittoni) 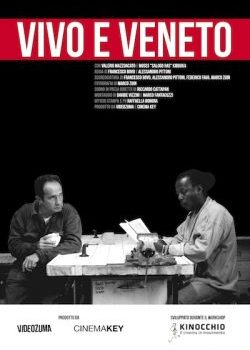