11.00-13.00: Opening session
The Nobel Peace Prize Awarded To Tunisian Civil Society
An Opportunity for The Arab World and for Europe

16.00-18.00 Third Session
Tunisia: A Model for Arab and Mediterranean Democracies?
Future Challenges in Tunisia and the Role of the International Community

—-
The debate will be attended by:
Hon. Imen Ben Mohammed | Member of The People’s Representatives Assembly, Tunisia

Reset-Dialogues on Civilizations and LUISS Guido Carli University in Rome are organizing a conference in Rome on “The Tunisian Exception. A Nobel for the Future of Democracy in the Arab World”. The organizers’ aim is to capture the attention of the Italian and European public opinion on Tunisia’s fundamental experience in the wake of the Nobel Peace Prize that has highlighted the capacity of the Tunisian society and politics to overcome the critical moments of the past years with a crucial agreement among secular and religious political movement and thanks to the very important role played by an active and resolute civil society. Although Tunisia is still threatened by a severe economic crisis, unemployment and regional instability, this country – an exception among all those countries which have experienced revolts and “Arab springs” since 2011 – has managed to avoid the spread of social and terrorist violence on the one hand, to approve a democratic and modern constitution and to embark on comprehensive although not always successful reform programs and on the other hand, achievements supported by free and fair elections and by a very lively public debate. Which are the specific reasons and features of Tunisia’s ‘success story’? Which internal and regional challenges is this country still facing? Will the Tunisian experience serve as a model for other countries in the Arab world and other countries in the Mediterranean region? And which role should Europe and the international community play with regards to Tunisia’s exceptional although still fragile democratic transition? Speakers from Tunisia and Europe with different political and academic backgrounds will tackle these questions and many more on this occasion of dialogue and mutual learning on November 24th, 2015.

The audio/video recording of the conferenze is available here: 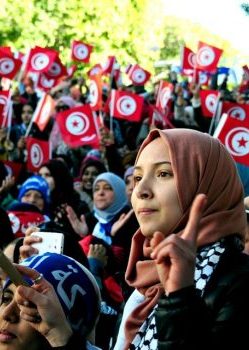