The Venice-Delhi Seminars are Reset-Dialogues on Civilizations project, in cooperation with the Jamia Millia Islamia, Seminar and the India Habitat Centre

This year, the Rome-based international association Reset-Dialogues on Civilizations will continue promoting dialogue between cultures and the culture of dialogue, reciprocal awareness between East and West and valorising the cultural, religious and political differences in a globalized world.

The schedule for autumn 2013 is as follows; the next Venice-Delhi Seminars will take place from October 10 to 12 in Delhi with the participation of the Indian magazine Seminar, and Jamia Millia Islamia, the Islamic University of Delhi and the India Habitat Centre. After the first meeting in the Indian capital in October 2010 on the subject “Minorities and Pluralism”  (see Seminar 621, 2011) and a second meeting in Venice at the Giorgio Cini Foundation from October 18 to 20,  2012, dedicated to “Cultural differences in times of economic turbulence. Social tensions, cultural conflicts and policies of integration in Europe and India”, the Venice-Delhi Seminars have become a regular event, with one being held in Venice and the next in Delhi.

The project’s general framework is religious and cultural pluralism, seen through the perspective analysis of social and political processes and exchanges between East and West. Every encounter is an opportunity to deepen political, social and economic trends that run through society, like India’s and, increasingly, European society, where cultural, ethnic and political differences coexist and interact. Each meeting consists of five sessions lasting three days and papers presented by by experts and academics from all over the world attending roundtable discussions dedicated to the analysis of policies relating to minorities and the global challenge of the multi-ethnic composition of our societies.

The proceedings and more articles from our 2012 edition in Venice, Italy, are published in the September 2013 issue of Seminar magazine. You can visit its website here: www.india-seminar.com

10-12 October 2013 – Third Venice-Delhi Seminars
Coexistence and mutual respect, rights to be protected, freedom of speech and freedom of worship, blasphemy, the ethics of responsibility

The third Venice-Delhi Seminars will take place from October 10 to 12, 2013 in Delhi and will be dedicated to three days of study on the subject “Religious Pluralism and Freedom of Expression in India and Europe: Coexistence and Mutual Respect, Rights to Protect, Freedom of Speech and Freedom of Worship, Blasphemy, Ethics of Responsibility”. The objective of this second round of the “Plural Future” project will be to critically examine the growing tension between the democratic need to protect differences and the right to freedom of expression and the vital need for modern democracies to guarantee peaceful coexistence between majorities and minorities, as well as freedom of worship in conditions of cultural and religious pluralism protected from the extremist excesses of demands based on ethnicity and identity. We will therefore also analyze the public visibility of radical and extremist tendencies from the United States to Europe, to Muslim-majority countries and India.

Analysis will take place from a perspective paying particular attention to the manner in which this wave of violent opposition to dialogue and cultural differences challenges liberal democratic order, tested by a new need to implement rights and respect of minorities. Specific importance will be attributed to conditions experienced by Muslim and Christian minorities. The subject of respect between communities and the rights of minorities will be analyzed also in the European context. European, Indian and American scholars will attend.

Particular attention will paid to the media in this 2013 edition, and its role in portraying cultural and religious differences as well as its capacity to encourage or prevent the development of peaceful co-existence and an acceptance of differences in conditions of cultural, religious and ethnic pluralism.

The Reset-Dialogues on Civilizations project has been organised also so as to involve a large number of students, graduates and doctoral students.

First session – 10.30 a.m. – 1.00 p.m.
Democracy and the tension between freedom of speech and respect for the other’s religion, culture, identity. India and Europe

Third session – 10.30 a.m. – 1.00 p.m.
Blasphemy between present and past: the history of punishment and decriminalization of blasphemy in Europe, India and other countries

Fourth session – 2.00 p.m. – 4.30 p.m.
In the eyes of the other: religions seen by other religions.
Proximity, conflicts, hybrids and syncretism through traditions, rituals, food and dress codes

The Venice-Delhi Seminars were also made possible thanks to a grant awarded by the Italian Ministry of Foreign Affairs and the support of the Nomis Foundation. 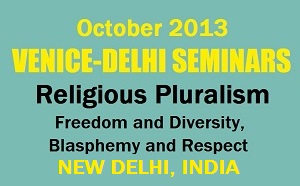