An international conference jointly promoted by
Reset Dialogues and the Faculty of Islamic Studies, University of Sarajevo

How do social, religious and political communities foster genuine and lasting reconciliation? What are the viable paths to achieving reconciliation: by way of civil society and social movements, or via diplomacy, truth commissions and official declarations?

Obviously, religion is not at the origin of all conflicts: secular and other types of ideologies share responsibility for instigating and perpetuating painful group experiences that call for redress. When state and religion were intertwined, or in times of war and repression, “reconciliation” frequently meant forced assimilation. Despite having inspired or justified violence in the past, however, religions may help to bridge the chasms they once welcomed and to heal wounds inflicted in their name. But they may also exacerbate and reopen grievances.

Politics can safeguard the space for reconciliation to take place but has its own shortcomings: the legitimacy of the underlying political regimes interacts with these processes, and can aid or impede the State in the role of neutral broker. And State actors can themselves form an obstacle to reconciliation.

Finally, is there a complementary role for theology in the process of reconstructing identity? Communities may have a capacity for transformation but lack the scholarly resources. How can societies go forward while acknowledging and preserving memories of exile, forced conversion, war or genocide? What seems certain is that the absence of reconciliation can prevent other conversations from taking place. This conference seeks to fill that opening: to identify practical paths to achieving forgiveness and thus moving on.

Participants will gather to advance our understanding of the bases and practices of reconciliation across multiple political and religious contexts. Speakers will be invited to focus on essential elements of justice and forgiveness within Judaism, Christianity and Islam, as well as in the aftermath of democratic transition, systemic oppression or ethno-national conflict.

This workshop will engage with reconciliation in secular conflicts as well as secular humanist approaches, including philosophy and ethics. Thus, scholars may appeal to sacred texts in Abrahamic traditions and beyond or to the legacies of Gandhi and Mandela. The cases to be examined may include “classic” examples of internal reconciliation like Northern Ireland, South Africa, the Balkans, or the European Union, but the focus goes beyond situations of post-conflict resolution.

Comparing theories, experiences and best practices, the conference will aim at generating useful insights and concrete policy recommendations for all stakeholders involved in sensitive reconciliation processes at different latitudes.

The edited volume that we produce from this meeting will be a featured publication in our Intercultural Lexicon series on crucial key words and political-cultural terms.

This conference is made possible thanks to the generous support of the Rockefeller Brothers Fund, the Italian Ministry of Foreign Affairs and International Cooperation, the University of Bern, and the Clough Center for the Study of Constitutional Democracy.

Further info and detailed programme to be announced soon. 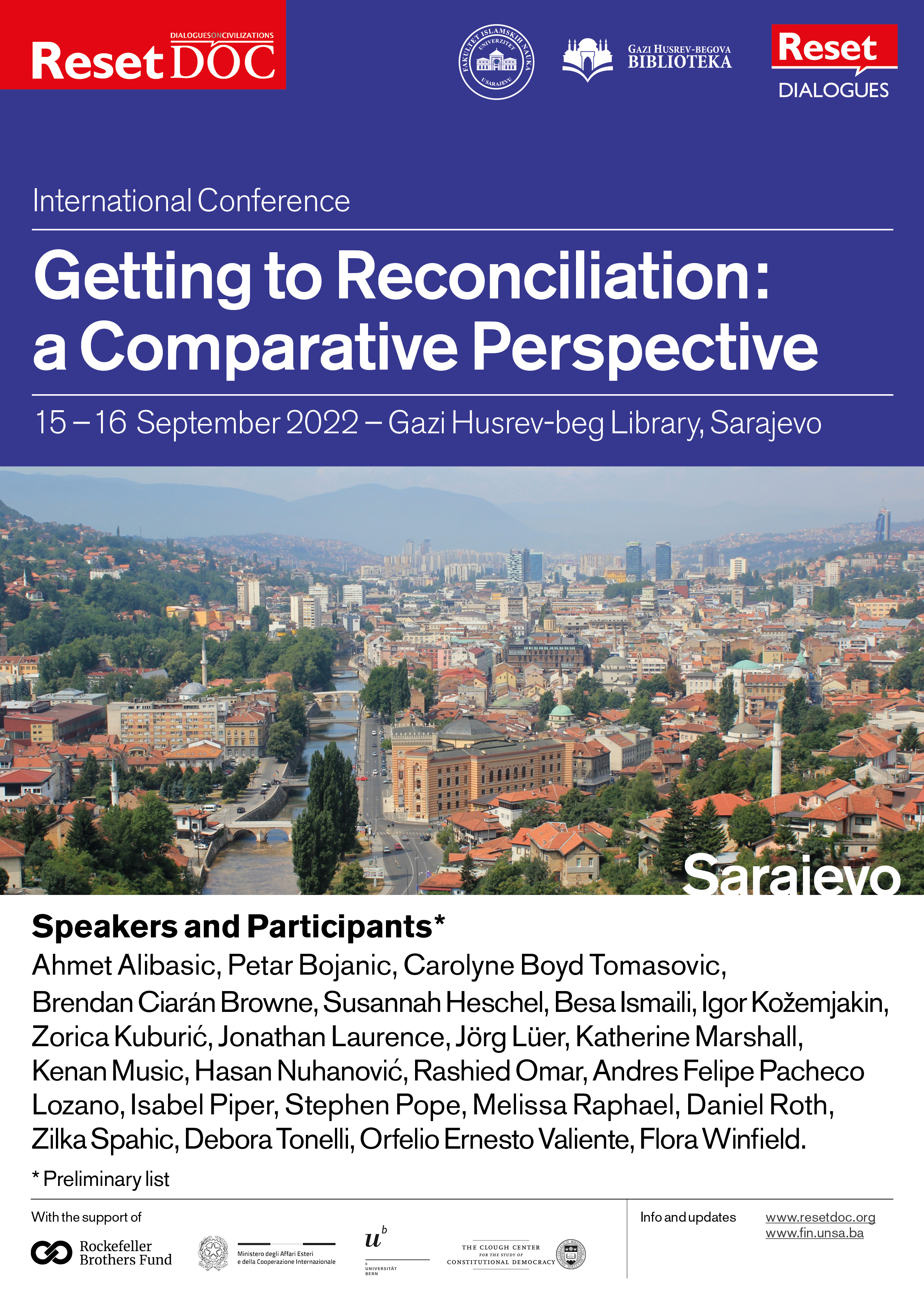