The Istanbul Seminars 2015, organised by Reset-Dialogues on Civilizations in partnership with the Istanbul Bilgi University, will bring together for the eighth time philosophers, political analysts and sociologists for a week on the Bosphorus. The subject debated will be the republican political model and the crisis it is experiencing from Europe to the Middle East, confronted with the globalisation of politics, economics and communications in an era of migrations, populisms and new technology. Debates will address citizenship and the bewilderment of nation states in the global world. Attention will be paid to the case of Europe, frightened on one hand by immigration and, on the other, overwhelmed by the pressure of illiberal movements hostile to pluralism and cultural differences. The Seminars will also discuss the deviation of the Arab Springs which have openly opposed the republican model – identified by insurgents with the authoritarianism of nationalist Arab regimes – without, however, allowing the emergence of alternative legitimate and inclusive models.  Roundtables and debates will also focus on the role of Turkey in the greater Middle East today, caught between the threats of jihadism and war on its southern borders, internal challenges, the relationship to Europe and the pursuit of a regional leadership role. In this context, the seminars will also discuss religion – which has violently returned to the international stage by the jihadist emergency – and secularism as well as the complex relationship that, even in republican contexts, they both entertain with the fundamental issue of freedom of speech. Case studies and roundtables will also focus on the Kurdish struggle for recognition, the Tunisian democratic exception and ‘post-republican’ transcultural democracy in Latin America. 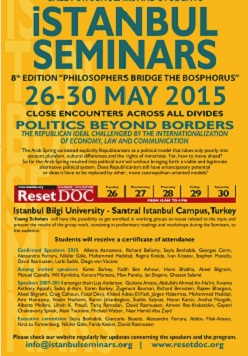